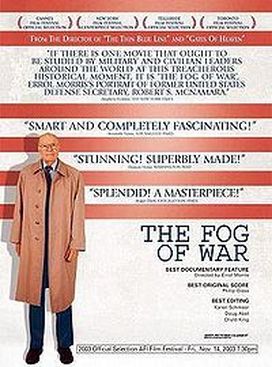 THE FOG OF WAR  Eleven Lessons from the Life of Robert S. McNamara
​


I think I can say that in the Fog of War we meet a man struggling with the moral anguish that many of us would feel if we could somehow find the honesty to look at our responsibilities for the blood that metaphorically stains our hands. I think that this song captures the existential cul de sac that McNamera confronted in his final days: Rendered by Blind Faith.

Ten additional lessons from R.S. McNamara
These supplement the documentary; they are in the DVD's special features.
1) The human race will not eliminate war in this century, but we can reduce the brutality of war—the level of killing—by adhering to the principles of a "Just War," in particular to the principle of "proportionality."

2) The indefinite combinations of human fallibility and nuclear weapons will lead to the destruction of nations.

3) We are the most powerful nation in the world—economically, politically, and militarily—and we are likely to remain so for decades ahead. But we are not omniscient. If we cannot persuade other nations with similar interests and similar values of the merits of the proposed use of that power, we should not proceed unilaterally except in the unlikely requirement to defend directly the continental U.S., Alaska and Hawaii.

4) Moral principles are often ambiguous guides to foreign policy and defense policy, but surely we can agree that we should establish as a major goal of U.S. foreign policy and, indeed, of foreign policy across the globe: the avoidance, in this century of the carnage—160 million dead—caused by conflict in the 20th century.

5) We, the richest nation in the world, have failed in our responsibility to our own poor and to the disadvantaged across the world to help them advance their welfare in the most fundamental terms of nutrition, literacy, health and employment.

8) War is a blunt instrument by which to settle disputes between or within nations, and economic sanctions are rarely effective. Therefore, we should build a system of jurisprudence based on the International Court—that the U.S. has refused to support—which would hold individuals responsible for crimes against humanity.

9) If we are to deal effectively with terrorists across the globe, we must develop a sense of empathy—I don't mean "sympathy," but rather "understanding"—to counter their attacks on us and the Western World.

10) One of the greatest dangers we face today is the risk that terrorists will obtain access to weapons of mass destruction as a result of the breakdown of the Non-Proliferation Regime. We in the U.S. are contributing to that breakdown.
Powered by